Colin and I have just come back from a week’s holiday on Eilean Shona, a wee island off the west coast of Scotland. The ferry (small rubber dingy) picked us off the mainland at 5.00pm on Saturday, we were walked to our cottage and left to enjoy the peace. We had enough food, drink and books for a week.
Eilean Shona is a sort of mini Scotland. It has some reasonable hills to climb, a diverse international forest, lochs, fine walking, history, wildlife and a fabulous white sandy beach. 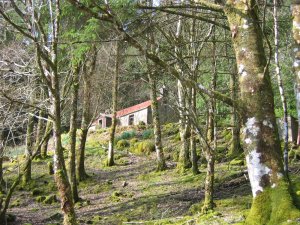 The island has a number of holiday cottages. We were staying in Red Cottage which was up a hill on the edge of a forest. There was so much storm damaged dead wood lying around we were encouraged to have a camp fire, which we delighted in doing most evenings.

Afternoon tea at the cottage

Being a mad recycler I was keen to keep the rubbish we produced and left behind to a minimum. The new estate managers, Rose and Ali, had told me that they hoped to create a vegetable garden. I asked if they had a compost heap for my vegetable scrapes, not yet but they had something better. Three pigs who were employed as environmental rotivators, churning up the vegetable patch and grateful for anything you threw at them.

We failed to see the promised wildlife of pine martin, otter and sea eagle, but we did manage to see deer and grey seals and plenty birds. And we brought some wildlife back with us; the walk to the beach had us wading through some pretty long heather. As a result of this heather bashing both Colin and I have been plucking tics out of our skin ever since. I thought April would have been too early for Scotland’s nasties, but apparently not.

The sun sparkled beach – was it really April? Yes, that’s why I still wore my hillwalking boots on the sand

Just because I was on holiday did not mean I forgot a very important appointment. At 8.30pm on Saturday the 28th of March, Colin and I sat in our wee Red Cottage and watched our wood burning stove glow while we turn off the lights for an hour.

Moira McPartlin made a big impact with her debut novel The Incomers, which tells the tale of a West African woman moving to a small town in 1960s Scotland. It was shortlisted for the Saltire Society First Book of the Year Award and was a critical success. Novels Ways of the Doomed, Wants of the Silent, and Star of Hope make up the Sun Song Trilogy. Moira is also a prolific writer of short stories and poetry and was been published in a variety of literary magazines. She lives in Stirlingshire. View all posts by Moira Mcpartlin

Just back from a very weather-challenging week on Mull. We decided to climb Corbett, Dun da Ghaoithe the first day despite wind and rain. So glad we did. The wind increased to gale force most of the week. Still managed a trip out to Erraid but couldn't explore too far. Great campsite at Fidden Farm, looking out to Iona. Read loads of books and ventured out when we could. Had a great walk up to 'S Airde Beinn (295mtr), a crater above Tobermory. #vanlife #isleofmull #fiddenfarm
A bit behind at posting. These are the fabulous poets I've been reading over the last few weeks. Just about to start The Stone Age. #poetoftheweek #poetrychallenge #poetsofinstagram #highlandbookprize #poetrybooksociety #redsquirrelpress
A quick march up West Lomond on this fine Sunday morning #lomondhills #campervanlife #skylarks #lovefife
Blair Atholl to Aviemore. 38 miles, two overnight camps, mixed weather with one wild storm, one birthday boy. #buspassbackpack #lairigghru #wildcamping #longdistancewalk #heavybackpack #adventurers #blairatholl #aviemore #earnedourpints #glentilt #fallsoftarf